Pirate Radio Studios, Inc. announces the opening of Pirate Radio Recording Studios. Located in the same suite of studios as Radio Memphis, this spot continues the long history of being a recording studio in the famed Emmons Building at 4745 Poplar Avenue.

Under the PM Studios name in early 2014,  Pete Matthews and company through Alligator Records and Warner Brothers put Billboard charting records out from this magical studio.

The legacy continues with a slight twist. Pirate Radio Recording Studios is the only recording facility in the Midsouth connected to a live broadcasting internet radio station.

Radio Memphis began its on air operations 1 July, 2011. It currently has listeners in all 50 states and over a 170 countries worldwide. Pairing Radio Memphis with a recording studio has always been a long term plan. Donald “Duck” Dunn had made a similar remark before. Now, an act can set up in the tracking room; properly mic’d, mixed & balanced. Their performance can then be broadcast live and recorded.

Musicians from all corners of the world continually come to Memphis. When they do, they tend to stop by Radio Memphis. Now, they can set up and record their material. Many come just so they can say they recorded in Memphis, Tennessee.

Recording with us is not just limited to our studios in Memphis. Ryan has a live rig and can come to any venue you are playing to make that live record a reality.

Above, Ryan Royals (left) with Brian Johnson of AC/DC.

For a limited time, you can come in and take advantage of our introductory rates and record your band within the hallowed walls of Pirate Radio Recording Studios. For more information, you can go to THIS page. You can drop us a line at music@pirateradiostudios.com or give us a call at 901-352-0107. 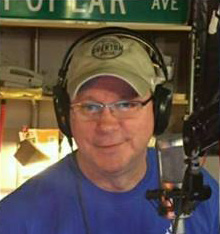